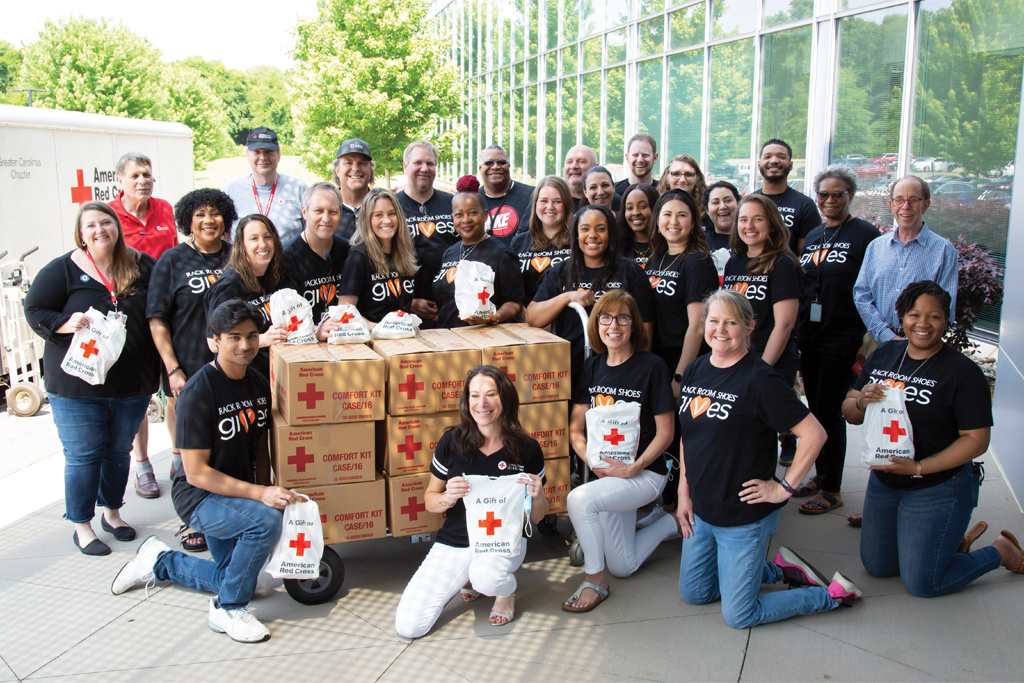 This fall, as Rack Room Shoes celebrates its 100th anniversary, the retail chain is also marking another proud moment. Its annual fall fundraiser for Shoes That Fit, a nonprofit that distributes footwear to kids in schools, will this year benefit nearly 700 schools in its communities, a new record for the partnership that launched in 2007.

To date, the retailer’s Shoes That Fit program has provided more than 450,000 pairs of shoes to children in need and raised more than $11.6 million in stores, including a $300,000 company match each year.

But Rack Room’s philanthropic efforts extend well beyond that fundraiser. In 2011, the company established Rack Room Shoes Gives with the goal of organizing all of the retailer’s give-back initiatives under one charitable arm. The program was created by and is still overseen by Brenda Christmon, senior director of brand communications, who said that its philanthropic mission has permeated the spirit of employees.

“Our mission statement is, ‘The Company Must Serve the People.’ It is our guiding principle and part of our DNA,” Christmon said. “Our parent company, Deichmann Group, maintains a special commitment to those in need and has made it a fixture through its sustainability efforts, trade practices as well as social responsibility.”

For the Rack Room Shoes Gives program, Christmon established guidelines to use in the decision-making process for all charities under consideration. These include the support of women, children and families in need; enhancing school and school programs within the local community; and offering community support in scholarships, and military and disaster relief efforts.

Under these guidelines, the retailer engages in several programs in addition to Shoes That Fit. Its Teacher of the Year program has in the past funded projects like new technology labs and upgraded laptops and equipped an able-challenged classroom with new modular desks.

The company also offers a match program that allows for employees to donate to 501c3 charities that fall within its guidelines, which will be matched up to $500. And at the corporate level it provides supports to the American Red Cross and Military Makeover.

Additionally, in 2020, Rack Room Shoes was one of many high-profile footwear companies to take a stand in support of racial equality. In June of that year, the retailer announced a $1 million donation — $200,000 per year for five years — to use toward a diversity plan that included scholarships, internships, mentoring programs and donations for education and economic development in the Black community.

Rack Room Shoes also said at the time that the program would include training for implicit bias and acceptance of cultural differences at its 500-plus stores and corporate offices.

“We are putting action behind our words toward our expanded diversity initiative,” said Christmon.

This year, for instance, the company brought in 10 interns from several historically Black colleges, and three (who were recent graduates) were hired into permanent positions.

“We look forward to continuing to support causes and organizations that combat systemic racism and injustices affecting the Black community and people of color in our country through relationships with the National Urban League and others, to help further our diversity efforts,” Christmon said.

For its newest effort, the company is looking to provide more opportunity for its own employees. In early 2022, Rack Room Shoes Gives opened applications for the Dr. Heinz-Horst Deichmann College Scholarship, a program available to the retailer’s associates that is renewable for up to three years. Its first class of recipients were announced in April and included five associates who each received $2,000 per year, to assist with their continued education.

Christmon said that according to internal surveys, Rack Room team members cite social responsibility as a reason to work at a particular company, so it’s important not only for community building but for staff retention. “Now more than ever, employees want to feel engaged with the company’s efforts, and want to know what the company stands for,” she said.

Looking ahead, Rack Room Shoes Gives plans to increase its commitment to diversity over the next five years and has numerous sustainability efforts in the works. “Rack Room Shoes is dedicated to making the world a better place for women and children by creating, developing and supporting programs and nonprofit organizations that provide a strong foundation for their futures,” Christmon said.