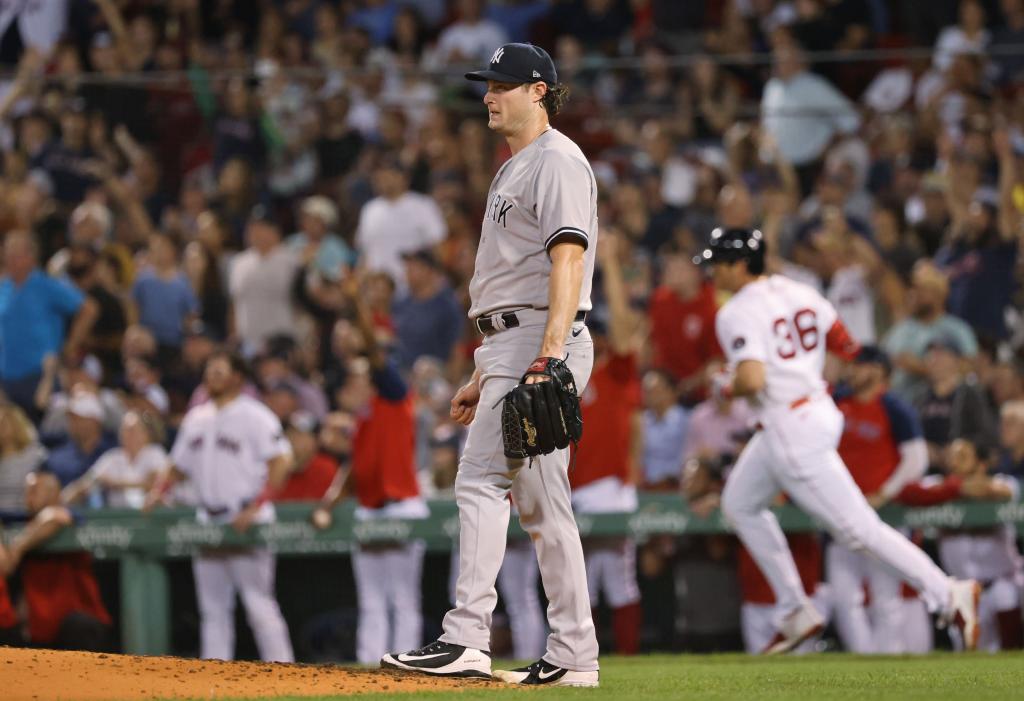 Three Yankees home runs, including two courtesy of Aaron Judge, spared Cole a loss Tuesday night and handed him a no decision instead. But his propensity for giving up homers, especially at Fenway Park, continued in the 7-6, 10-inning win over the Red Sox.

Cole was tagged for three home runs, which accounted for three of the four hits he allowed across six innings of work. The right-hander, who struck out 10, left with a 4-3 deficit before Judge’s second homer of the night tied it back up in the eighth inning.

After serving up long balls to Triston Casas, Reese McGuire and Xander Bogaerts, Cole has now allowed 27 home runs this season — tied for the third-most in MLB, though he had thrown more innings than any other pitcher in the top 17 in that category. His 1.4 home runs per nine innings are tied for fifth among qualified pitchers in MLB.

The 12 regular-season home runs that Cole has now given up in his career at Fenway Park (spanning eight starts and 44 innings) are the most he has allowed in any stadium he has not called home — meaning Yankee Stadium, Pittsburgh’s PNC Park and Houston’s Minute Maid Park.

The first homer of the night came in the second inning. After walking Rafael Devers — who is normally the one doing damage off Cole — to lead off the inning, Cole got two outs before leaving a 2-0 fastball over the plate to Casas. The rookie drilled it off a sign above the Green Monster for his second career home run to give the Red Sox a 2-0 lead.

After Marwin Gonzalez tied the score with a two-run homer in the third inning, Cole served up another home run in the bottom of the frame. McGuire hooked his 96 mph fastball around the Pesky Pole for his first homer of the season, putting the Sox back up 3-2.

Then, after Judge tied the score with his first homer of the night in the top of the sixth, Cole immediately gave the lead back to Boston in the bottom of the inning. This time it was Bogaerts who tucked a solo shot inside the Pesky Pole for a 4-3 lead.

Cole had pitched well against the Red Sox in his most recent start this season, giving up two runs (on one home run) across seven innings at Yankee Stadium in July. But in the start before that, the Red Sox had tagged Cole for five runs (on two home runs) across six innings at Fenway Park.