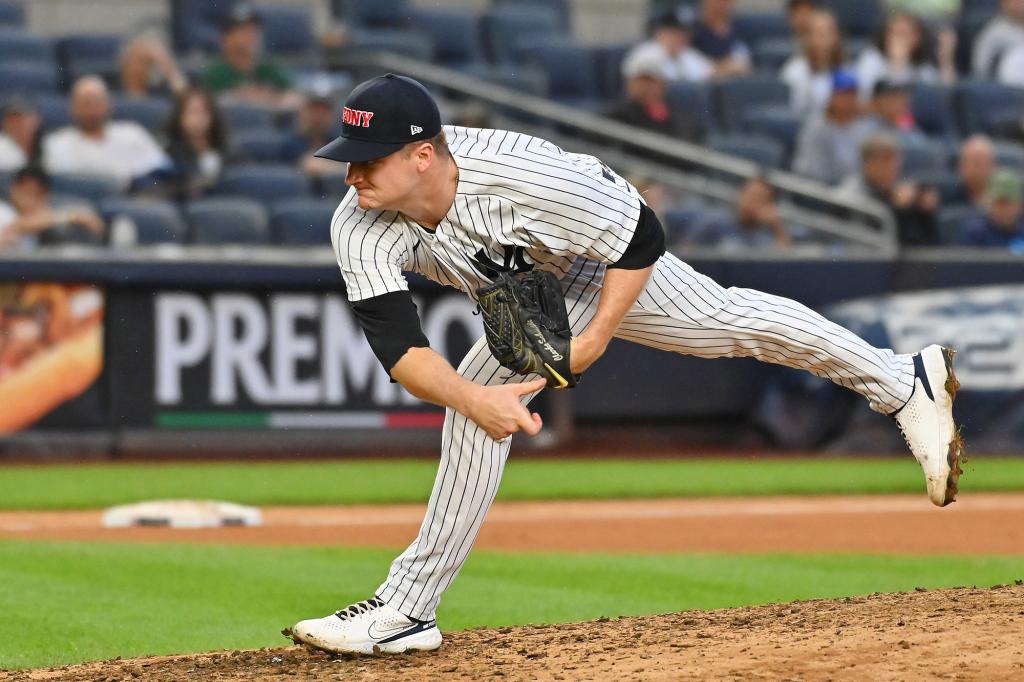 The Yankees played a game Sunday familiar to the Rays of recent vintage. They began with an opener and followed with a lot of trustworthy relievers. They won 10-4 over Tampa Bay after a 10-3 rout a day earlier.

The potential for a disastrous weekend after Friday night’s loss to the Rays was averted. Exhales heard. With two blowouts, the Yankees re-opened a 5 ¹/₂-game AL East lead on the Rays and six on the Blue Jays.

Just as vital, they showcased a blueprint for how to do more than just hold on in their division. Aaron Judge has been the Yankees’ MVP — probably the MVP of the whole sport. But as important to the Yankees maintaining first place for the majority of the season has been strong run prevention built with a combination of quality and quantity in pitching.

And Sunday was a good day for this — and not just in The Bronx, where eight pitchers contributed to victory. Because in Hartford, Conn., in a Double-A rehab, Zack Britton, Miguel Castro and Aroldis Chapman each pitched a hitless inning.

“We talked about this at the beginning of the year, trying to find as many options that we can rely on in big situations as possible,” Yankees pitching coach Matt Blake said. “This was our issue in 2020. Down the stretch we were leaning on [Chad] Green, Britton and Chapman and we needed more than that. So on a day like today, you need eight guys because the rainout [last week] messed us up with a doubleheader. But I do think this plays to our strength.”

The Yankees have allowed more than four runs just once in the last 20 games — and in a 9-0 loss to the Rays on Sept. 2, Domingo German allowed three runs in six innings before Greg Weissert and Anthony Banda teamed to yield six runs in an inning. And — in the best-case scenario — Weissert and Banda will be nowhere near a Yankee postseason roster.

And the Yankees can begin to dream on what that best case might look like. Britton, Castro and Chapman are edging closer. Luis Severino is making one more rehab start before being reinserted into the rotation. Scott Effross is potentially closer to a return without officially beginning his rehab yet than the three relievers who worked at Double-A Sunday.

That the Yankees are potentially facing tough decisions is impressive considering they lost their Swiss Army knives in Green and Michael King and traded Jordan Montgomery. Brian Cashman has been generally clobbered for the Montgomery deal, especially with the lefty doing so well for the Cardinals. But the theory behind the trade was that Montgomery likely would not start a playoff game and Harrison Bader would further assist the run prevention with strong defense in center — and Bader also began his rehab at Double-A on Sunday as the designated hitter.

In The Bronx, the Yankees pounded Tampa Bay starter Luis Patiño for nine runs in 1 ¹/₃ innings. The at-bats, such a problem for weeks, were terrific. Patiño got to two strikes on 10 of 13 Yankees he faced and the Yanks were 4-for-6 with two homers and four walks. Patiño had an 0-2 count five times and the Yankees were 2-for-2 — with one of Gleyber Torres’ two homers — and three walks.

With an off day on Monday, Aaron Boone was able to be aggressive with his pen. German, working on short rest, threw a scoreless first. The keys to the eight-man relay were a combined 4 ¹/₃ shutout innings from Wandy Peralta and Clarke Schmidt. Peralta, a below-the-radar trade for Mike Tauchman in April 2021, has been terrific as a Yankee — rubber-armed and effective. Schmidt, with a 2.06 ERA in relief, has helped bandage the multi-role losses of Green and King.

Clay Holmes finished, allowing his first walk and second run in seven games since coming off the injured list. After a disastrous first game back from the injured list on July 14, Jonathan Loaisiga in 22 games has a 1.33 ERA and .411 OPS against (he did not pitch Sunday). The Yankees used the back ends of their IL stints to get the deliveries of Holmes and Loaisiga back in order. Their re-emergence has solidified the late-game look. The Yanks will hope that Britton, Chapman and Effross can have the same impact off the IL.

“That’s the part where we will have to cross a bridge when we get there — what does this look like when we have four or five arms potentially added in the mix,” Blake said.

Considering how low the Yankees had felt recently, where do they sign up for that as their biggest problem the rest of the way — potentially too many arms for too few slots?